The Department of Mechanical Engineering is pleased to announce that Professor of Mechanical Engineering and Acting Chair Balakumar Balachandran has been appointed Chair of the Department of Mechanical Engineering. Balachandran will take on this responsibility immediately, continuing his recent efforts to lead the department to even greater national and international prominence. Clark School Dean Darryl Pines commented on Balachandran’s new appointment, stating, "[he] will bring to his new position the strengths that have made him so effective as the Department’s former director of graduate studies." During his tenure as Director of Graduate Studies (2006-2010), Balachandran was instrumental in increasing diversity within the department’s graduate student population, raising the number of students recruited from highly-ranked undergraduate programs to unprecedented levels and expanding the number of fellowship holders and the number of Ph.D. graduates placed in tenure-track positions. Pines adds, "We are fortunate to find such an able leader to ensure the department’s continued progress and future success." A Clark School faculty member since 1993, Balachandran received his B. Tech (Naval Architecture) from the Indian Institute of Technology, Madras, India, and his M.S. (Aerospace Engineering) and doctorate (Engineering Mechanics) from Virginia Tech, Blacksburg, Virginia. In addition to his faculty responsibilities, he currently directs both the ME Vibrations and the Dynamics and Control Laboratories. Balachandran has also authored and co-authored numerous publications, and serves in editorial capacities with a number of major engineering journals. He is a Fellow of AIAA and ASME, where he has chaired various committees in his areas of expertise. The ME Department congratulates Professor Balachandran on his new position and we all look forward to working with him in the years to come. For more information on ME’s new chair, please visit his faculty page. 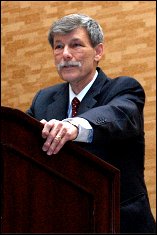