The UM Office of Technology Commercialization has named three projects by Clark School professors as this year's top UM inventions.

In the Life Science category, Matt Dowling (a graduate student in the Fischell Department of Bioengineering) and Srini Raghavan (chemical and biomolecular engineering associate professor) were honored for their "nano-velcro" chitosan-based bandage, which could significantly reduce mortality rates among cases with uncontrollable bleeding. The researchers collaborated with Dr. John Hess and Dr. Grant Bochicchio from the University of Maryland School of Medicine.

In the Information Science category, John Baras (professor of ECE and ISR) was recognized for his work with the Army Research Laboratory on a key exchange system to secure Internet transactions. His invention is of interest for national defense systems, major banking companies, and other industries where secrecy is of great importance. 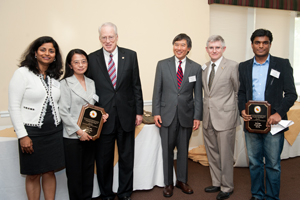