Could Standing On A Scale Give You Better Insights Into Your Cardiovascular Health?

Research being led at the University of Maryland could provide new insights into improving non-invasive cardiac health monitoring.

Their latest findings published in Scientific Reports, "Ballistocardiogram: Mechanism and Potential for Unobtrusive Cardiovascular Health Monitoring," offers a new mathematical model that could help establish a way to use an easy to measure vital sign known as cardiogenic body movements to improve cardiovascular health monitoring.

Cardiogenic body movements occur when the body pumps blood from the heart outward through the arterial system. As the blood travels outward, the body makes small recoiling movements to adjust for the displacement as it moves through the body. While we can't feel these subtle sensations, researchers have been able to easily measure these movements using specially modified weight scales that calculate these movements through installed sensors.

However, since the Ballistocardiac movement was first observed about 140 years ago until now, it was unclear what mechanism created these movements and how they could be used to evaluate cardiovascular health.

"We've succeeded in creating a mathematical model that unveils the relationship between these very small body movements and the flow of blood through the body," explained Hahn. "By mathematically formalizing the equilibrium of forces exerted on the blood moving through the aorta, we were able to derive a model capable of predicting the waves as well as the physiological timings and amplitudes for the major waves." 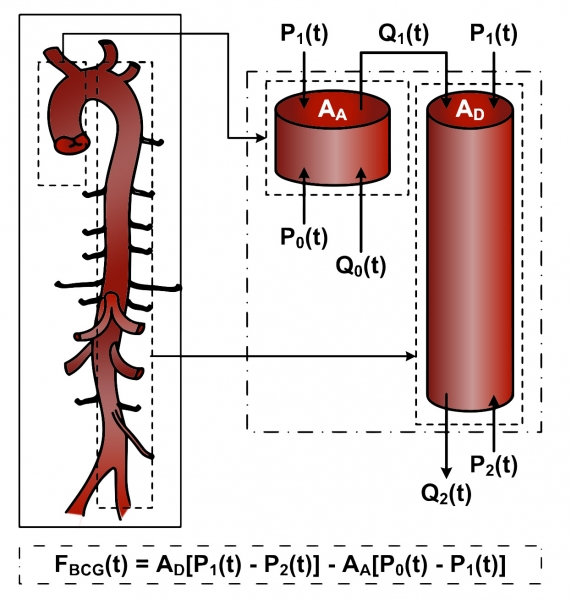 Mathematical model of the BCG waveform. The aorta is simplified as two tubes in cascade. Source:

By understanding the mechanism of these easily measured waves and creating a way to correlate these measurements to other predictive factors of cardiovascular health, the team thinks there are possibilities in using these methods to achieve effective and unobtrusive ways to monitor and diagnose cardiovascular health and disease, such as simply standing on a scale, lying on a bed, or wearing a wrist band or ear phones.

Their research was based on work supported by the National Institutes of Health and the Heart and Stroke Foundation of Canada and was performed in partnership with colleagues at the University of Alberta, Edmonton, Georgia Institute of Technology, Atlanta and Michigan State University, East Lansing.