Clark School Board of Visitors Chairman Tom Scholl has been named a "Friend of the Entrepreneur" by The Washington Business Journal for his work in the venture capital community.

The full article is available on the newspaper's web site, but requires a subscription to view in its entirety.

Scholl is a successful entrepreneur and investor with more than 25 years of experience in communications systems, equipment, chipsets and software. He has been active with Washington, D.C.-area high-tech start-ups for more than 15 years.

Scholl co-founded Cognio, a developer for spectrum management and MIMO antenna technology for short-range wireless applications. Cognio was acquired by Cisco in October 2007.

He has also served as director of Torrent Networking, and of Integrated Telecom, and was senior vice president of engineering at Hughes Network Systems.

Scholl is the author of "Packet Switching" in the Electronic Communications Handbook published by McGraw-Hill. He holds patents relating to software, the Internet and digital telephone systems.

Scholl has been honored as Entrepreneur of the Year by the Maryland High Technology Council and is a member of the Institute of Electrical and Electronics Engineers and the Association of Computing Machinery. He holds a bachelor's degree from Purdue University.

Scholl is also a member of the University of Maryland Board of Trustees. He is a major proponent of Clark School programs, including Engineers Without Borders. 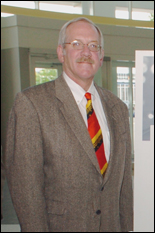