"Student groups are invaluable to the engineering community."

On February 25, 2010, UM students from several engineering societies gathered for a luncheon and received checks from engineering sponsor, ExxonMobil. Presenting the checks were ExxonMobil representatives Charlie Choe (ME ’09), Tom Leonard, and Gary Cheng.

As a Clark School Corporate Partner, ExxonMobil has been a sponsor of the engineering school for many years. With a decision to begin recognizing student engineering societies that have been affected during the economic downturn, ExxonMobil initiated a program to support student-initiated requests for funding. Of the organizations that applied for funding, five societies were chosen to receive checks in the total amount of $3,750. The Society of Women Engineers, the American Institute of Chemical Engineers, the Black Engineers Society, Engineers Without Borders, and Pi Tau Sigma (PTS), the Mechanical Engineering Honor Society were all benefactors of ExxonMobil's generosity.

Former PTS president and ME alumnus, Choe was excited to be part of this event. "Student groups are invaluable to the engineering community and [ExxonMobil] wants to make sure that these groups can fulfill the goals that they have set for the year."

Student leaders from each society accepted the checks and briefly outlined the plans for their respective donations. "It was quite humbling," says Justin Pearce (ME ’10), current president of PTS. "We are very grateful. The Maryland Tau Mu chapter will not forget the generosity of ExxonMobil." Like many of the other recipients, PTS plans to use the check to alleviate the loss of funding caused by the recent University budget cuts. Additionally, Pearce says, "We can be sure to provide a return on investment for ExxonMobil in the form of continued collaboration in the near future." 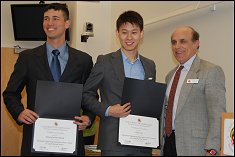 Sochol Receives Early Career Award from the Journal of...

You Can Make It at Maryland