Established in 1987, the APS grants the George E. Duvall Shock Compression Science Award to individuals in recognition of their contributions to understanding condensed matter and non-linear physics through shock compression.

The 2015 committee recognized Forbes "for his advances in shock-compression science involving phase-transformations, high explosives and detonation physics; for extensive contributions to the shock physics community through mentorship and teaching; and for service to the Shock Compression Topical Group."

Forbes' research interest is in the area of material response to rapid energy deposition, and in particular, shock wave and electron beam loading of inert and energetic materials. He received his Ph.D. in Shock Wave Physics from Washington State University in 1976 and served as a research physicist at the Naval Surface Warfare Center, White Oak and Indian Head Maryland Laboratories from 1963-1996, and at the Lawrence Livermore National Laboratory (LLNL) from 1996-2003.

Forbes served as an Adjunct Professor of Physics at American University from 1994-1996 and Instructor of Shock Wave Science at LLNL from 1996-2003 which included one year (1999-2000) in the University of California, Davis Applied Science Department. Currently, he is a Senior Scientist at the Energetics Technology Center in St. Charles, Md.

Forbes will receive the award during the Shock Compression Topical Group meeting held in Tampa Fl., June 14-19, 2015, where he will also be delivering the plenary talk.

For more information on Forbes, please visit his faculty webpage. 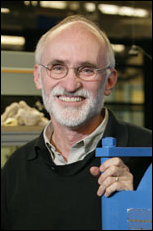