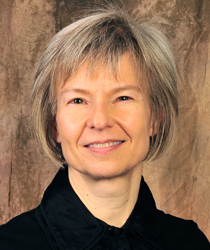 Dr. Smela's research is primarily in the field of microelectromechanical systems (MEMS), particularly polymer MEMS and bioMEMS. She focuses on the use of organic materials (from polymers to cells) in microsystems to realize microactuators, cell-based sensors, and CMOS/MEMS integrated systems.

Hands-on learning gets a new twist with a design created by UMD students.

A national search has been initiated for a new Dean of the A. James Clark School of Engineering.

Such skins could equip soft robots with integrated sensing and estimation.

A grant from The Lemelson Foundation will accelerate environmentally and socially responsible engineering through innovation in undergraduate curricula.

Recipients have contributed to improving the quality of women's lives.

She will begin serving in this position on Sept. 1.

Li is the fourth Mechanical Engineering professor to receive the award for outstanding excellence in teaching.

Article explores potential of antbots in search and rescue operations

New bio-sensors could speed up and improve the detection of pathogens, explosives.

Researchers are partnering with IBI, graduate of university's TAP program.

Pi Tau Sigma honored two faculty members and a teaching assistant during their initiation ceremony on May 10th.

The department congratulates these outstanding students and faculty on their well-deserved awards.

Congratulations to Elisabeth Smela, who was recently awarded the status of Associate Professor with tenure.

Selin is the only recipient of the award from UMD, College Park campus in 2004.

Four members of the Mechanical Engineering faculty are recipients of the Department of Defense MURI and DURIP awards.