Created by the U.S. Congress in 1986 to honor Senator Barry M. Goldwater, Goldwater Scholarships are designed to ensure the nation has a source of highly qualified scholars and researchers. Recipients are chosen based on academic merit, research experience and career objectives.

Schaler is a junior with a 4.0 GPA. He is active in Engineers Without Borders, working on the Burkina Faso and Peru projects and co-leading a local project focused on storm-water management on the Anacostia River. He recently returned from Japan, having devoted two summers to research at RIKEN and a semester of study at Tohoku University. Schaler currently conducts research with Prof. Sarah Bergbreiter on MEMS fabrication. He plans to earn a Ph.D. in mechanical engineering focusing on nanotechnology. Schaler would like to teach and conduct research on MEMS at a university or government research institute. He intends to focus post-graduate and career research on developing mobile (walking, jumping, flying, etc.) and networked micro-robots.

The full listing of 2010 Goldwater Scholars is available online: http://www.act.org/goldwater/sch-2010.html. 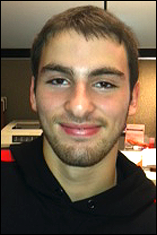