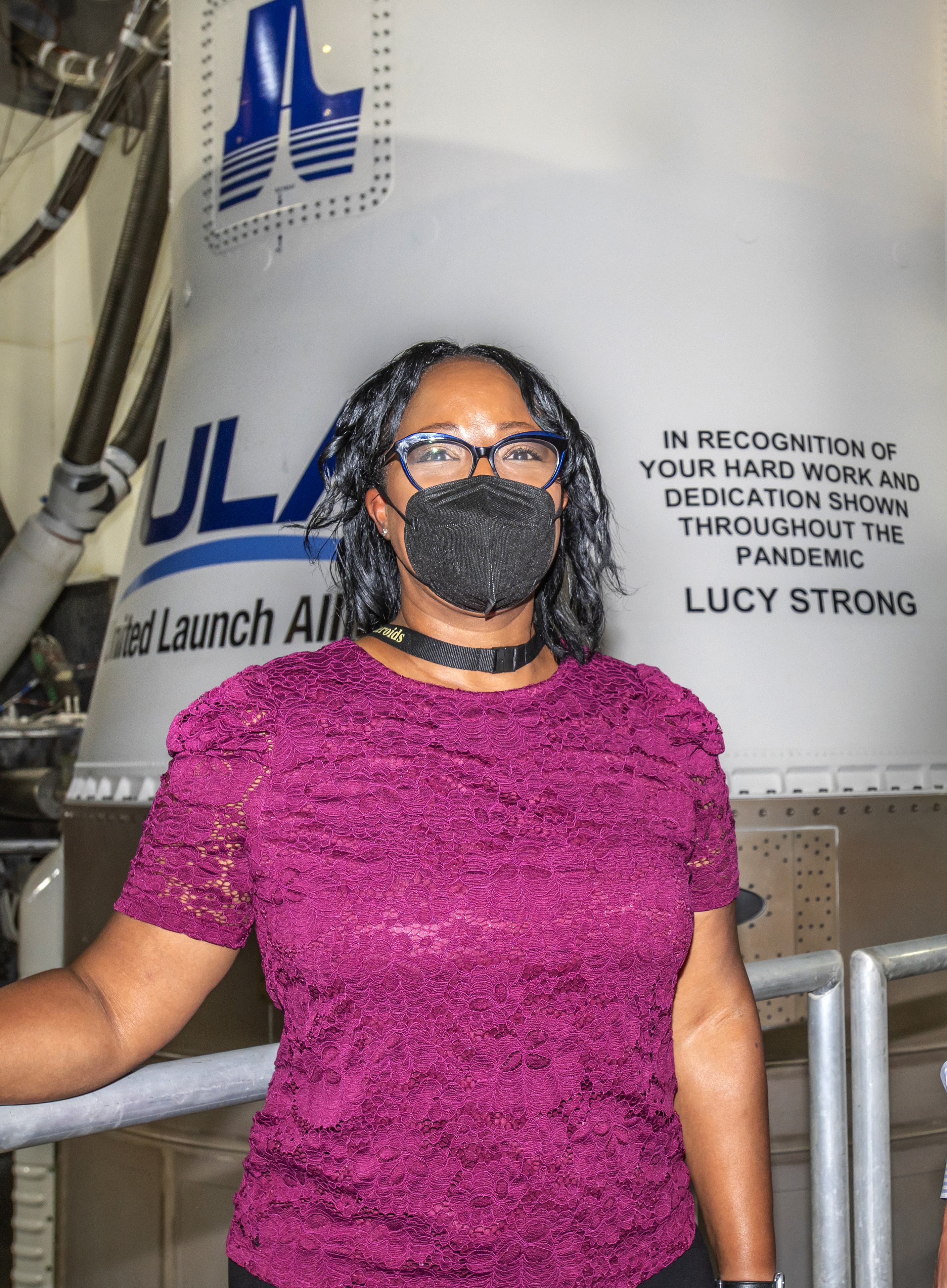 No one would describe Donya Douglas-Bradshaw's childhood as easy. Growing up in modest circumstances on Maryland’s Eastern Shore, she spent hours working in the fields alongside her relatives, helping to earn money. Her parents were young but dedicated to her success; together with the greater community, they instilled in her a strong belief in her potential—and in the importance of lifting up others.

Although she faced many disadvantages, Douglas-Bradshaw (B.S. ’94, mechanical engineering) also had strengths that would take her far. Teachers noticed her prodigious math skills, which ultimately won her a college scholarship. At 10 years old she resolved that someday she would work for NASA—and in the coming years, her grit and determination would help her achieve that dream.

Today, she is deputy director for planning and business management at the Goddard Space Flight Center’s Engineering and Technology Directorate. It’s her latest role in a NASA career that has also included managing the Lucy Mission and serving as a thermal engineer for Space Technology-5, a 2006 mission that launched three 25kg satellites into orbit in order to test concepts and technologies that could be used in future space endeavors. Prior to Lucy, she was the project manager for the ICESat-2 ATLAS instrument. ATLAS. The largest and most technologically advanced instrument built in-house at Goddard, it launched successfully aboard ICESat-2 on September 15, 2018.

As an engineer by training who has built her career in the space arena, Douglas-Bradshaw is at home on the front lines of technological innovation—and feels passionate about using technology to advance human knowledge. Over the course of her career, she has authored or co-authored over 20 publications in research and development of capillary pumped loops, loop heat pipes, and variable emittance coatings. “At NASA, I have the opportunity to work on things that will rewrite the textbooks,” she said. “That’s exciting.”

“Be Bold, But Do Your Homework”

Confidence and self-advocacy have helped fuel Douglas-Bradshaw’s success, she often tells young people who seek to follow in her footsteps. “People still tend to associate men with leadership roles, and when women act in similar ways, we get called all kinds of names,” she said. “I don’t care. When I walk into the room, you’re going to know that I’m there.”

“But it would be different if I wasn’t a strong performer,” she added. “Carrying yourself with confidence can make all the difference—but you have to have the capabilities to back it up. Be bold, but do your homework.”

Her readiness to be her own strongest champion—as well as to advocate on behalf of a just cause—is something she’s brought to the table since the start of her career. As a young engineer at NASA, she found herself paired with a mentor who was known to harbor contempt towards women. Sure enough, he obstructed rather than helped, refusing to answer questions or assign her to projects that would help her advance.

Undaunted, she went to her supervisor. “Are you setting me up for failure?” she asked him bluntly. The supervisor recognized his mistake, and transferred her to a different mentor.

Douglas-Bradshaw has shown similar moxie outside of her professional life—for example, as an advocate for education and a longtime member of her local PTA. One year, she organized what in effect was a school strike, in which parents refused to let their children take a mandated, statewide test unless the state provided the budget and resources they needed to repair their aging school. The state relented and came forward with the additional funds.

Stepping Up to the Plate in Challenging Times

Douglas-Bradshaw's drive and determination were very much in evidence during 2020, when the COVID-19 pandemic forced sudden and radical changes in the way we work and interact. At the time, she was the Lucy Mission’s project manager, with responsibility for launching a spacecraft that would travel four billion miles over twelve years to collect data on Jupiter’s Trojan asteroids, as well as on one asteroid in the main asteroid belt.

"At NASA, I have the opportunity to work on things that will rewrite the textbooks.”

Even under normal circumstances, the mission presented formidable challenges. For one thing, its team was distributed around the country, with the spacecraft provider, Lockheed Martin, and the mission's principal investigator both based in Colorado, while the navigation team operated out of a facility in California and the instrument teams were in Arizona, as well as two in Maryland. On the East Coast, meanwhile, Douglas-Bradshaw and her team at NASA-Goddard were responsible for managing the entire undertaking.

The COVID-19 lockdowns imposed daunting constraints, but the Lucy team adapted. Many rose early or went to bed late so they could meet virtually with their colleagues across the United States. The team developed a method called “over the shoulder,” with a Zoom video session pointed at a computer so the engineers could follow the data and look at the trends. Using an iPad and a GoPro camera, an engineer would walk around in the clean rooms, providing video for the mission assurance personnel. Through creative collaboration of this kind, the team was able to stay on schedule; in fact, Lucy lifted off the very second its launch window opened.

The mission lived up to the motto that Douglas-Bradshaw had inscribed on the spacecraft: Lucy Strong!

And COVID-19 wasn’t the only test of that strength: in May 2020, the murder of George Floyd at the hands of Minneapolis police set off intense social unrest. While staying on top of the Lucy Mission, Douglas-Bradshaw also had to weather the anxiety and fear engendered by these events.

“My kids had to go out every day to their jobs,” she said, “Would they get pulled over? I worried about them. And I was trying to figure out how to cope with my anxieties without burdening the team.”

As it turned out, the team’s care and support were exactly what helped get her through. “People contacted me of their own volition, sending me emails of encouragement, letting me know they were allies. It reminded me that we were Lucy strong and that we weren’t just coworkers, but a family.”

Leadership With a Vision

With her work on the Lucy Mission now behind her, Douglas-Bradshaw is bringing her leadership skills to NASA’s largest directorate, one that encompasses approximately 1,200 civil servants and many thousands of contractors. “It’s bigger than some entire NASA centers,” she notes.

Only months into her new role, she is already working to better align NASA operations with the agency’s strategic priorities, using an approach dubbed SMART. The acronym stands for “Strategic thinking; Metrics; Alliances and partnerships; Reimagining; and Transferring knowledge,” with each of these components encompassing a number of secondary domains.

“What I’m looking to bring to the Engineering and Technology Directorate, drawing from my experience as a Project Manager, is the ability to identify business and project management practices that we can apply to our institution, in order to increase our efficiency and achieve our strategic goals,” she said.

Meanwhile, she continues to be an advocate for greater female and minority representation in the space industry, and has served as chair of NASA Goddard’s Women’s Advisory Committee. She also remains involved in education and outreach programs. Such activities are in line with a motto that is close to her heart: to whom much is given, much is required.

Douglas-Bradshaw has received numerous awards in recognition of distinguished achievement and outstanding leadership, and has been featured in national publications such as Upscale Magazine and Black Enterprise. She was also listed as one of THEGRIO.COM Top 100 History Makers in the Making. “I’ve been blessed with capabilities and skills, and I really view it as my duty to use my skills and my talents for the betterment of work, society, and my community,” she said. “Mentorship has been essential to my success at every stage of my career, and so I feel a great responsibility to give back.”

“I believe in helping others become the best that they can be.”