Han was named an ASME Fellow in 2007, and was awarded with their Associate Editor of the Year award in 2005. He previously held positions as associate technical editors for both the Journal of Electronic Packaging and Experimental Mechanics. He is also a Fellow in the Society of Experimental Mechanics. Most recently, Han and his colleagues won the Outstanding Paper Award at the 16th International Conference on Electronic Packaging Technology (ICEPT 2015).

He is also a member of Maryland's Center for Advanced Life Cycle Engineering (CALCE) and director for CALCE's Laboratory for Optomechanics and Micro/nano Semiconductor/Photonics Systems. His research interests are in the areas of design of LED-based lighting system, mechanical design of photonics and microelectronics devices, hermeticity of MEMS devices, moisture and gas diffusion in flexible electronics and experimental micro and nanomechanics (optical methods and methodologies).

The plaque will be presented at the ASME 2015 International Mechanical Engineering Congress and Exposition (IMECE), held November 13-15 in Houston, Texas.

Han is the second Mechanical Engineering faculty member to receive the ASME EPPD Mechanics Award since its inception in 1994. Professor Abhijit Dasgupta won the award in 2010. 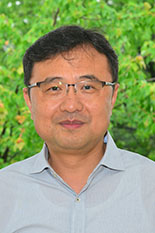