Associate Dean and Keystone Professor of Aerospace and Mechanical Engineering William Fourney and Mechanical Engineering Professor Emeritus Robert J. Sanford received awards at the annual Society for Experimental Mechanics (SEM) meeting held June 2 - 5 in Greenville, S.C. Fourney received the Frocht Award, presented annually to the "educator of the year," for his "outstanding achievement as an educator in the field of experimental mechanics."  Sanford was recognized with a "Gold Certificate" award for his fifty years of membership and service to SEM. SEM President Emmanual Gdoutos presented this year's awards.

Fourney’s nomination was submitted by faculty in the Department of Mechanical Engineering, but his commitment to education and research is recognized across the Clark School of Engineering.

Professor Hugh Bruck, who organized the award submission, said, "Professor Fourney was nominated based on the numerous contributions he has made to the academic programs in the field of Experimental Mechanics, as well as to the A. James Clark School of Engineering and the Department of Mechanical Engineering. His efforts have had an extraordinary impact on our Department by providing students with an enhanced and customized educational experience in their first two years through the Keystone program. This has prepared them to achieve even greater academic success during their final two years within our Department then before the creation of the program." 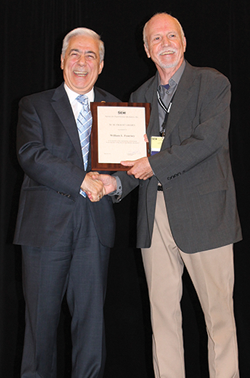 Fourney received his B.S. in Aerospace Engineering and his M.S. in Theoretical and Applied Mechanics from West Virginia University. He received his Ph.D. in Theoretical and Applied Mechanics from the University of Illinois in 1966. His research interests are in experimental mechanics and fracture mechanics, and he has published over 250 articles on his research in dynamic material response, fracture and crack arrest, including over 50 reports to the sponsors of his research, including the National Science Foundation, Department of Energy, Oak Ridge National Labs and many others.

Sanford received his B.M.E. (1962) and M.S.E. (1965) degrees in Solid Mechanics from George Washington University. He received his Ph.D. in Solid Mechanics with a minor in Mathematics from Catholic University of America in 1971 and pursued post-doctoral study at the University of Maryland from 1978 to 1979. His research interests include experimental and numerical fracture mechanics, optical mechanics, experimental stress analysis and strength of materials. Sanford is a founding member of the American Academy of Mechanics, and he has been recognized for his work through numerous honors, awards and professional memberships.

In addition to Sanford and Forney, several mechanical engineering students attended the meeting through the assistance of a George R. Irwin Centennial Research Travel Award, and presented their work at the conference and as part of the SEM Student Paper Competition.

SEM, originally called The Society for Experimental Stress Analysis, was founded in 1943 as a nonprofit scientific and educational organization with the goal to "further the knowledge of stress and strain analysis and related technologies." SEM members have interests in modeling and analysis, strain measurement and structural testing.

For more information on Fourney, Sanford or SEM, please visit their websites. 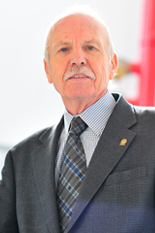 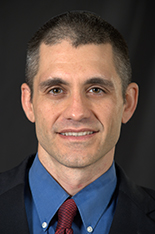 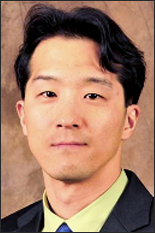