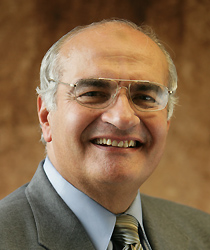 Minta Martin Professor Amr Baz recognized with both a Distinguished Scholar-Teacher Award and the Poole and Kent Teaching Award for Senior Faculty.

ME professor recognized for his work in the field of smart structures and materials.

Research Review Day held on March 20, 2006 at the University Inn and Conference Center.

The award will consist of a gold medal, a certificate, and an honorarium

A. James Clark School of Engineering Awards - Call for Nominations

The faculty member receiving the service award will be presented with a plaque and a cash award.

Dr. Amr Baz, Professor of Mechanical Engineering, has been named Director of the Center for Small Smart Systems.

Department of Defense have selected three teams from the A. James Clarke School of Engineering to recieve Multidisciplinary University Research Initiative (MURI) Awards.