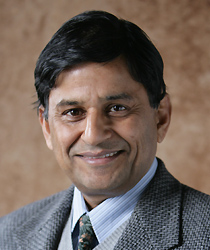 Professor Ashwani K. Gupta has been a faculty member in the Mechanical Engineering Department at the University of Maryland, College Park since 1983, following six years at MIT as a member of the research staff in the Energy Laboratory and Department of Chemical Engineering, and three years at Sheffield University as an independent research worker and research fellow in the Department of Chemical Engineering and Fuel Technology.  He has over 40 years of experience in Combustion engineering since his graduation from Southampton University in 1970, and is the author of over 700 technical papers, three books, 12 edited books, and 12 book chapters. In 2016, Dr. Gupta was elected to Fellowship of the Royal Aeronautical Society (RAeS), UK, the highest professional recognition bestowed by the RAeS.  He is currently Honorary Fellow of American Society of Mechanical Engineers (ASME), and Fellow of American Institute of Aeronautics and Astronautics AIAA), Society of Automotive Engineers (SAE) and the American Association for the Advancement of Science (AAAS). More about Dr. Gupta on Wikipedia.

Recognized for outstanding achievement in developing improvements in the field of personal transportation.

Gupta was honored with the degree by the University of Derby, United Kingdom.

Her Royal Highness the Queen of Thailand to preside over ceremony.

Gupta Awarded Higher Doctorate from the University of Southampton

Prof. Ashwani Gupta was awarded a D.Sc. for his contributions to the field of combustion engineering.

Research paper debuted as fourth on list of top downloads in May.

ME professor recognized for his scientific contributions in the field of solid fuels.

ME professor recognized for contributions to efficient alternative energy methods.

ME department collaborates with Petroleum Institute for international event

Designation is highest grade of membership bestowed by SAE International.

Congratulations to Professor Gupta for these outstanding awards.

Students from the ENME 489W visited the Wheelabrator Baltimore Company that converts domestic Wastes to Energy.

The award consists of a $2000 honararium, vermeil medal and certifcate.

ME Professor Ashwani Gupta has been invited to be a member of the Nanotechnology Technical Advisory Group.

ME Ashwani K. Gupta has been selected to receive the 2003 Kirwan Faculty Research and Scholarship Prize.

The award is granted for the establishment of one of the seven NASA URETI.